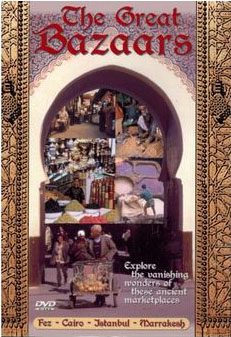 ABOUT THE FILM:
For centuries, across vast windswept deserts and through rugged outposts, the various people in the Islamic world travelled by camel caravans to trade in the ancient marketplaces of Cairo, Istanbul, Marrakesh and Fez. Fabulous wealth flowed from the Middle East long before the age of oil sheikhs and the OPEC cartell. Located at the crossroads of Europe, Asia, and Africa, the Great Bazaar was the golden child of the cradle of civilization.
Today the Great Bazaars are struggling against an onslaught of economic and cultural changes that imperils the historic insignificance within the Islamic world. Despite the threatened existence, the bazaars are still great centres of spiritual, cultural and material wealth - vanishing wonders to behold.
400.000 people continue to live and work inside the 1200 years old bazaar of Fez, a place so steeped in the ancient ways that even the automobile is forbidden. The heavy aura of danger and mysteries surrounds the snake-charmers, acrobats, and fortune-tellers of the Marrakesh-bazaar, the best known entertainers in all of Islam. In tiny shops beyond the tourist-dominated sections of the Cairo-bazaar, traditional Egyptian garments are still ironed by foot, a vanishing trade, that has been dominated by the same families for generations. For the past 500 years Istanbul has been home to the greatest of the Great Bazaars, with more than 500.000 people passing through his 18 gates every day. But despite hs massive size and traffic, the Great Bazaar of Istanbul is diminishing, as modern turks increasingly shun its twisting by-ways in favour of local convenient-stores and shopping-malls.
Come explore a mystical realm of vibrant colors, exotic aromas and ancient traditions, experience a sacred space where the world`s most exotic riches can be had for the right price - enter the Great Bazaars of the Middle East!
It was in these ancient marketplaces that global trade first flourished. Despite their antiquated presence in a rapidly changing world, the bazaars remain great centers of spiritual, cultural, and material wealth - vanishing wonders to behold.
Join us, as we take you on the journey of a lifetime, across the medieval rooftops of Fez, through the cobbled lanes and blind alleys of Cairo, past the dazzling street performers of Marrakesh, over the jutting minarets and domed mosques of Istanbul, and into the heart of ancient Islam - behold the Great Bazaars! Enter a realm, where religion and commerce are intertwined, where every transaction is a choreographed ritual of negotiation, where merchants and craftsmen keep alive ancient traditions in their everyday trade. Discover what makes these commercial centres the world`s most sacred marketplaces. 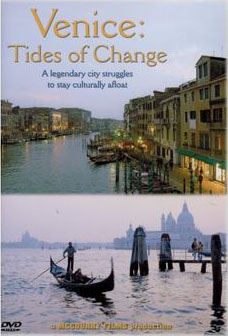 Rising sea levels may not be the greatest threat to one of the world's most romantic cities! For more than 800 years, residents of Venice have preserved their way of life despite changes all around them. But now Venice is struggling to maintain its unique character in the face of serious challenges, including unprecedented rates of emigration, mass tourism and environmental damage. Each year while millions of tourists flock to Venice, thousands of its young people flee the city. In recent decades, Venice has seen approximately two-thirds of its population depart, enticed elsewhere by modern lifestyles and economic opportunities. If this continues, Venice could become merely a 'theme park' -- all show without substance -- no longer enlivened by the vibrant culture that gave rise to its stately buildings and graceful canals. In their own words, today's Venetians describe the issues that threaten to engulf their society, along with their search for solutions to reduce the very real risk that their culture could drift away long before the city's historic landmarks sink into the Adriatic Sea.